VISION & MISSION
We are the most preferred technical body for knowledge dissemination & skill development of mobility professionals, students, and faculty
We are a trusted think-tank advising policymakers on Mobility-Related Matters
We are a self-sustaining Society with more than 10% of Mobility Professionals as Members
We are a nimble and Professional Organization Creating Value for Mobility Engineering Community

This is a past event. Registration is closed. View other SAEINDIA events. 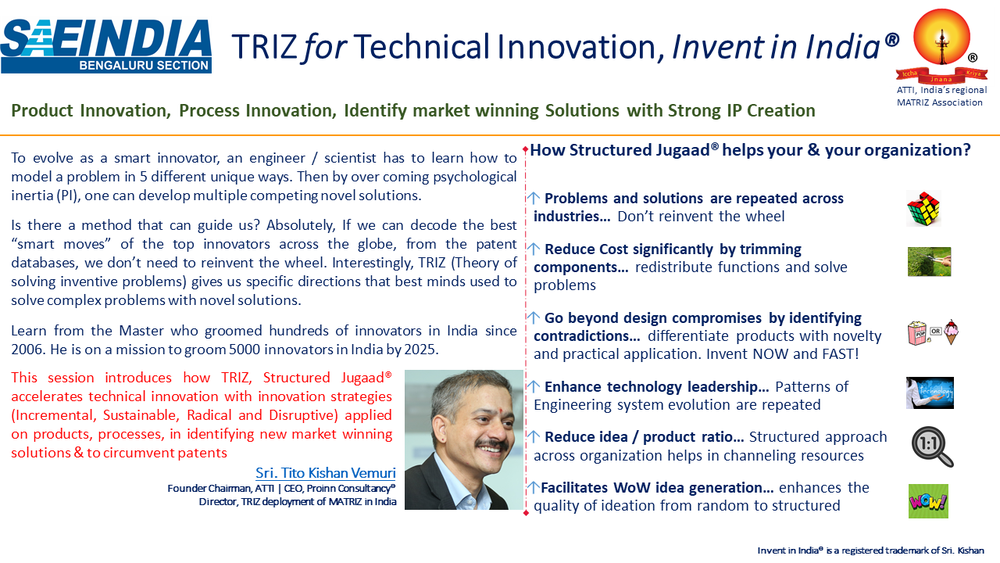 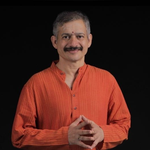 "Mr. Kishan is an International Product Innovation Specialist and thought leader in structured innovation methods of TRIZ. He is a Coach, Inventor, Mentor, Trainer and Trainer.
In the last 15 years, taught TRIZ to thousands of engineers, facilitated 1500+ inventions and millions of USD savings in product and process innovation.
As the Founder Chairman of India's regional MATRIZ organization, ATTI, Mr. Kishan has been one of the 20+ people Accredited MATRIZ trainers around the world and a CEM representative of MATRIZ (The International TRIZ Association) since 2015. ATTI has set a goal to groom 5000 innovators by 2025 under his leadership.
He has been appointed as a Director of TRIZ deployment of MATRIZ in India by the President, MATRIZ in Nov. '19.
He is the Founder & CEO of Proinn Consultancy (since 2015), a premier innovation consulting firm with a strong repute of facilitating faster innovation with inventions, Invent in IndiaÂ®.
Conducted & organized 50+ product innovation workshops with MATRIZ certification since 2015 with TRIZ levels 1, 2, 3 and Design for PatentabilityÂ® level 1.
Since 2015, through his TRIZ workshops facilitated hundreds of inventions across: Software, Aviation, Power Generation & Distribution, Automobiles (2, 3, 4 wheelers & trucks), Oil & Gas (upstream and downstream), Medical devices, IoT devices, IIoT, Telecommunications, Materials, etc.,
Only Indian to have given keynote talks at international TRIZ forums (Malaysia, China and Azerbaijan).
As an innovation coach to a start-up defined innovation strategy and facilitated inventive problem solving on a kitchen appliance product that would be released in Indian market shortly.
Mr. Kishan has been a MC member of SAE Bengaluru section and Member of CII National Committee for Innovation and R&D since 2018.
Presently a board member of SAE Off highway and SAE Branding & Communication.
Prior experience:
20 years of corporate leadership at GE Energy, GE Aviation and Tata Consulting Engineers both working in India and abroad.
Worked across Gas Turbine Technology and multiple energy verticals of Power Generation and Distribution. Presented analysis & design to Chief Engineerâ€™s office. Have a granted US patent.
As an IP Leader to a world leader in Power Generation, enabled many hundreds of inventions at their India Engineering Operations.
In the last 20 years taught lean six sigma to thousands of engineers. As a certified Master Black belt at GE Energy, led a dynamic team 10 full time Black belts with huge impact and groomed them as leaders.
Taught across 9 countries from Chile to Philippines. As a master Trainer to GE Energy in India and APAC, certified Black belts to teach in APAC.
As a GE Aviation operational Excellence coach, deployed Lean Six Sigma across a biggest low cost carrier in ASEAN and enabled $xx million year on year savings in 24 months at Kuala Lumpur.
www.proinnconsultancy.com